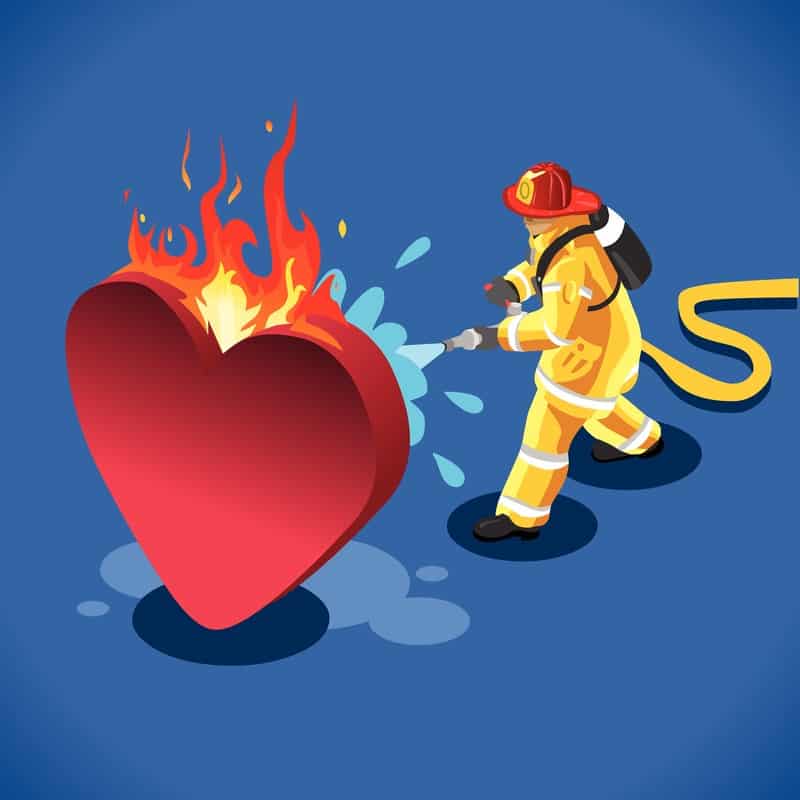 For decades, cholesterol was demonized as the No. 1 threat to heart, brain and arterial health. Then a growing body of evidence began to zero in on another villain. “The four horsemen of the medical apocalypse — coronary artery disease, diabetes, cancer, and Alzheimer’s — may be riding the same steed: inflammation,” a Harvard paper theorized in 2006. Since then, recent landmark studies have shown that chronic systemic inflammation, which we call “fire,” is both a cause of heart attacks and strokes and an important treatment target to help prevent them.

In 2017, the CANTOS trial generated worldwide headlines by reporting that therapies to lower inflammation — without lowering cholesterol — reduced risk for cardiovascular events and cancer by up to 50 percent. An even newer landmark study by 24 of the world’s top experts on Alzheimer’s disease (AD) and other forms of dementia, published in Lancet, was the first to report that these memory-robbing brain disorders may be preventable with strategies that include reducing brain inflammation. Here is a look at the latest discoveries and how to use them to keep your brain healthy and your memory sharp.

What is chronic inflammation and why is it so dangerous?

Inflammation is a normally protective response to injury and infection. If you stepped on a rusty nail, cells in the affected area would mobilize immune system troops to battle the invading bacteria. Called “the inflammatory cascade,” this call to arms involves more than 20 proteins that blast the invaders with toxins to kill them.

Chronic inflammation harms rather than heals because the immune system attack never stops. The result is like being shot by “friendly fire” in an endless war raging within the body. In 2012, two landmark studies published in Lancet were the first to show that chronic inflammation actually causes cardiovascular disease (CVD), the leading killer of Americans. This fiery process has been linked to so many other deadly or debilitating conditions that some scientists call it “the root of all diseases.”

Heart attacks and strokes are triggered when a diseased artery becomes so inflamed that it can no longer contain the plaque smoldering inside. Like a volcano spewing molten lava, inflammation causes a breech in the artery wall, leading to the formation of a clot. If the clot blocks blood flow to the brain, the result is an ischemic (clot-induced) stroke. If the clot obstructs flow in a coronary artery, the result is a heart attack.

Who is at greatest risk for developing chronic inflammation?

Chronic inflammation is fueled by such lifestyle-related disorders as obesity or having a large waistline, smoking, stress, lack of exercise, an unhealthy diet, insulin resistance and poor oral health. A landmark, peer-reviewed BaleDoneen study, published in Postgraduate Medical Journal, was the first to identify high-risk oral bacteria from periodontal disease (PD) — and the systemic inflammation they cause — as a contributing cause of arterial disease.

Also known as “gum disease,” PD is a chronic oral infection that affects the majority of Americans over age 30, many of whom are undiagnosed and unaware of their cardiovascular danger. A 2016 analysis that pooled results from studies of more than 7,000 people found that those with infected gums were 2½  times more likely to suffer heart attacks as those with healthy gums — and other studies have found similar links with heightened risk for stroke.

How does brain inflammation contribute to Alzheimer’s disease?

Inflammation and oxidative stress have also been linked to the buildup of brain deposits of beta-amyloid. Many scientists believe that accumulation of this sticky compound in the brain is the primary cause of AD, with the buildup initially disrupting communication between neurons and ultimately killing them.

According to this theory, known as “the amyloid hypothesis,” the development of the amyloid plaques that are the hallmark of AD activates immune cells, leading to inflammation that eventually destroys brain cells.

What are the best ways to protect your memory and reduce inflammation?


In the Lancet paper cited above, the researchers concluded that up to 35 percent of dementia cases could be prevented with nine healthy lifestyle steps. Proven strategies include the following: